What is the premise of the project… the core idea in a nutshell?
What is its primary challenge, or what about it will make it engaging?
Try to capture its essential qualities in a single sentence – a logline if you like.
1. PREMISE

What is the purpose of the project:
To Entertain?
To Teach or Inform?
To Make people laugh?
To Sell?
What information will you need to gather in order for your project to meet this purpose, and how will you obtain this information?
2. PURPOSE

What mediums will be used for this project, and what types of platform? What special technology, if any, does it call for?
What genre does it fall into?
What are the particular strengths and limitations of the mediums, platform and technology, and how will the project make the most of these?
What are the key characteristics of its genre, and what competing products in the genre are already in the market-place?
3. MODE(S) OF PRESENTATION

Who is this project intended for?
What kinds of thing are important to people in this group?
What type of entertainment do they enjoy?
What are their needs, hopes and fears?
How technically sophisticated are they?
4.AUDIENCE

What is the overarching goal of the fictional construct, and what mission is the user given in terms of trying to achieve this goal?
What kinds of things can the user do to enable the goal to be fulfilled?
What kinds of intermediate and smaller goals will the user be given along the way?
What will hook the user, and make this person want to achieve the overarching goal?
7. GOAL

What is the nature of the oppositional forces that the user will encounter?
What kinds of obstacles or challenges will need to be dealt with?
What will add tension to the experience?
Will some kind of “ticking clock” be built into the project?
8. OPPOSITION AND TENSION

How will the user be rewarded when he or she succeeds at a task?
What kinds of setbacks might the user encounter, and what happens when a setback occurs?
Will any type of help be offered?
Will the project be built with levels of difficulty, and if so, how will the levels be set?
What happens if the user fails at a task… what kind of consequences will result? Will the user have to begin again, or is there a less severe option?
How will the user know if he or she is doing well or badly?
9. REWARDS & CONSEQUENCES

It’s time to begin developing your characters,
Story elements,
Interactive components,
Structure and Interface, and
Gameplay and puzzles if there is a gaming component.

The concept document is a brief description of the project and usually the first written document to be generated.
It contains such essential information as the premise, the intended medium(s) and the genre.
It also notes the intended audience for the project.
When seeking finance, etc., it would be written in a vivid, engaging style that will convince readers of its viability.
The Concept Document

A bible is an expanded version of a concept document, and it is strictly an in-house working document.
Bibles are frequently used for complex, story-rich projects, and fully describes significant elements of the work.
It includes all the settings or worlds and what happens in them, and all the major characters, often including the backstories of the characters.
The Bible

The design document serves as a written blueprint of the entire interactive work. It vastly expands the information given in either a concept document or bible, and contains specific technical information about the interactivity and functionality.
It is the primary working document of any new media project.
It is a living document that changes as new features are added or existing ones changed.
The Design Document

As most of you are aware, the script is the document that sets down all the dialogue that will be spoken during the program, as well as the visuals and actions that accompany the dialogue.
Formats for interactive scripts vary widely.
Some resemble feature film scripts adapted to incorporate instructions for interactive situations.
Some companies prefer a multicolumn format, usually with something like 5 columns – response, programming instructions, value, audio label, sound effect, dialogue or V/O.
The Script

Flowcharts are a visual expression of the narrative line of the project, and illustrate decision points, branches, and other interactive possibilities.
They are often one of the first stages of production.
They are useful for explaining the project to people such as marketing specialists, clients, or investors.
They can be much easier to grasp than a densely detailed design document.
Flowcharts

Concept art (or concept drawings or sketches) are visual renderings of some aspect of the program.
Often used to depict characters or settings.
Also used as developmental tool to test and refine character designs.
Concept Art

Storyboards, as in your film or television experience, are graphical illustrations of the flow of action and other elements of the content, displayed sequentially.
They are a useful preproduction tool for many kinds of interactive projects, including VR simulations, immersive environments and interactive movies.
Storyboards

Pilots and prototypes represent working models of a small portion of the program which test and/or demonstrate how those elements work.
A variety of prototypes may be made throughout the production process to test different components.
They are regarded my many as more important for proving the viability of interactive projects than flowcharting or storyboarding.
Pilot or Prototype

Pick either your own project, or another that you are interested in doing, and take it through the ten step development plan.
It can be in any medium or for any type of platform.
What aspect or aspects of the project semm to need more thought?
Have any of the ten steps raised a red flag.
Or have some helped you discover potential about the project you had not seen previously.
Generating Ideas 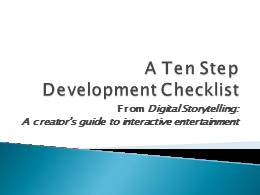