IntroductionThe proud history and sad decline of the Brighton West Pier is a familiar and well documented story, and whilst the old pier is now all but gone, the memory of the old pier and the desire to see a new one rise from its ashes remain as strong as ever. Brighton without a West Pier seems inconceivable to its residents and visitors alike.The West Pier Trust is in the process of developing a strategy for the future development of the pier and surrounding area. The strategy is being developed in conjunction with the members of the West Pier Trust, the people and businesses of the city, Brighton and Hove City Council and other key stakeholders.The first stage in this development was to ask our members, the residents of Brighton and Hove, local organisations and the general public their opinion. This document summarises those responses.Strategy2

Introduction – the strategy frameworkTo outline the key enablers and constraints that must be addressedTo note the outstanding commitments of the West Pier Trust that must be discharged before a new West Pier can be consideredTo propose a route for the development of options for any new West PierTo consult in the first instance the members of the West Pier TrustTo consult the residents and businesses of Brighton and HoveTo use the consultation as a basis for a development brief for a new West PierTo consult formally on the development brief with the members, the residents and businesses (and their representative groups), Brighton and Hove City Council, English Heritage and potential partnersStrategy3

Background – a basis for a new West PierStrategy5A new West PierThe strategy document also noted that any strategy must also be aware of those constraints which will need to be addressed before any consideration could be given to the development of the new West Pier.

Responses – the consultation frameworkAs part of the strategy for the future development of the pier and surrounding area the West Pier Trust engaged in an initial 3-stage consultation process in late 2014 and early 2015. These were :First to consult with West Pier Trust membersSecond to consult with the residents of Brighton and Hove, local civic groups and interested societiesThird to consult the general public through a questionnaire on the Trust’s websiteThe Trust asked:Whether it is desirable to pursue the goal of a new West Pier?And if so, what a new West Pier should be?The following pages summarise the responses from West Pier Trust members, a selection of local civic groups and interested societies and the general public.Consultation6

Responses - SummaryConsultees understood the wider strategy, the key enablers, constraints and the Trust’s priorities, particularly in terms of the i360 and West Pier Heritage Centre.The overwhelming majority of responses focused on a new West Pier. Most wished to see some form of new pier on the site. A minority was opposed to any new pier but this seemed to stem from the fear that any new development would need to be dense and commercially led; they were mainly not against a pier as such. One member summarised the views well. He said:“A new pier is not just desirable, it is essential. The pier is central to the original vision of the Trust and a new pier is implied by its current objects. Without this long term aim the support of the Trust’s members – and the sympathy of the visitors and populace of Brighton – would be in danger of slipping away. There is also a risk that the existing i360 would not be sustainable in the long term without a new pier to draw new customers along the promenade.”Consultation7

Responses - SummaryThe preference is for a low density promenade style pier with some innovative cultural attraction.The consultees share the Trust Board’s concerns on how to finance such a development without resorting to a high density commercially led development.Consultation8

Members’ responses – design style Consultees thought the design of any new pier should be primarily a contemporary one, for example one Trust member advocated:“.....a pier of modern design for the 21st Century.  This would complement the design of the i360 and be completely different to any other pier in the country so would attract visitors of all ages”It was also thought by some that the modern design could also include something of the old West Pier. For example:“.....may also may contain some of the salvaged structure/ironwork of the West Pier I am sure a design of the old and new could be achieved. The West Pier was a ‘promenade pier”“.....expand the pier and perhaps realize a glass bottom through which the remains on the bottom can be viewed““.....Retain the visual aesthetic of two key buildings (i.e. Pavilion and Concert Hall) – don’t over clutter design or over simplify ”Consultation9

Members’ responses – design style Some consultees wondered if the old West Pier may be referenced in the shape or spirit of any new structure :“.....to design a new pier which, without being a copy of the original, maintains its spirit in being delicate, light-hearted and decorative”“.....we understand that any new pier would have to be a completely new structure and although in general I am against reproductions, to incorporate the original shape would I think be most fitting”“.....to retain some heritage and architectural design I think old and new (modern) design should be combined, as I think it is important and it would be very nice for a replica of the concert hall to be created and included in the new west pier design as part of its architectural design and heritage”Consultation10

Members responses - use There were many suggestions as to what attractions might feature on a promenade pier:“....a green pier with high levels of sustainability and a winter garden that could reflect the current much loved profile of the sea island”“.....a ‘Stonehenge observatory’ on the deck showing alignments of horizontal angles (asimuths) at the winter and summer solstices (21st December and June) at sunset and sunrise”“.....perhaps a boat landing facility at the seaward end”“.....could be adorned with photographs of how the original Pier looked in its heyday, all the way up to the end of the Pier, so people can sort of take a journey through history while walking to the end and see the remains”“.....a pier sufficient to have water taxis drop people off and pick them up” Consultation11

General Public ResponsesThe general public was invited to join the consultation via a questionnaire on the Trust’s website which was live from November 2014 to February 2015. 110 responses were received and of those only 5 were against the idea of a new West Pier. In answer to a question on preferred activities on the pier, as with the Trust members, there was a mix of nostalgic and contemporary use ideas including a museum or art gallery, multi purpose event space, landing stages for boats, underwater viewing, dancehall and wind turbines. A flavour of these:“…some sort of adaptable performance space…where exhibitions could be held and open air cinema..’””…glass floors to see below deck…water taxi service…art gallery at sea” “…Something that shocks and awes people, or at least has an element of wonder about it. I’m sure this is what the original pier would have been for – entertainment and a show of ability and might”Asked what they would not like to see on a new pier, there was unanimous rejection of the ‘tacky’. Also rejected were commercial chains, replication of the Palace Pier and gambling.Consultation12

Group responses The Brighton Society made several points:We support the view that the island site, although iconic, can have no future.We do not share the Trust board’s “strong desire” to pursue the development of a new sea based pier. However, we have considered the three options:Option 1 – do nothing: the Brighton Society supports this option. We believe that large scale development on the beach should be discouraged in order to preserve it as an open space for use by the pubic and to protect sea views.Option 2 – a promenade pier: we agree with the Trust’s view that any development project on the site would need funding for both initial construction and ongoing maintenance. For that reason we reject this option since the lack of commercial activity means that such funding is unlikely to be available. The Trust’s document gives no indication of where the necessary funding would come from.Option 3 – a commercial pier: this option may appear to offer a financially viable development opportunity. We believe that........ would require an offshore structure which was unacceptably large and would seriously threaten the character of the neighbouring conservation area.Consultation13

Group responses The Regency Square Area Society were opposed to a new pier, or indeed any new structure, on the site of the old West Pier for the following reasons :A non commercial promenade pier would not be financially sustainable and we do not believe that this is a genuine option.The visible remains of the West Pier, the “Sea Island” have become iconic and are highly valued by many Brighton & Hove residents. The idea of preserving the structure should not be dismissed at this stage.The adverse effect on the area of another controversial development proposal should be considered. The i360 will bring a large number of visitors to the Regency Square Conservation Area and the additional activity allied to a new commercial pier could be harmful to the area. Moreover the planning and construction of a new pier would bring many more years of uncertainty and disruption to an area that has already suffered over 40 years of planning blightThe West Pier Trust Board notes these concerns (and shares some) and will continue to engage with the Society as the strategy developsConsultation14

Group responses The Hove Civic Society noted that : The West Pier Trust should take plenty of time over the consultation process. Consultations can become ‘a race to the bottom’ and a competition could be the best way of finding an innovative solution as it opens up ideas that would otherwise have never surfacedA new pier should be led by a revival of its relationship with the sea – activities should be water dominatedPier should be source of renewable energy and host wind turbines and solar panels (an inshore Rampion?). They asked “could these be mounted on the existing ruin?”The Regency Society welcomed the consultation as an important first step but requested more information before choices could be made between options, e.g. :This is an option (promenade pier) which is likely to appeal to many people and could fit well with the reference to ‘public benefit’ in the Trust’s first charitable objects…we feel that a proper appraisal of this option requires at least an indication of how the required income might be generatedConsultation15

ConclusionThe key conclusion is that the Future Strategy consultation has achieved its two main objectives. It has:given the Trust a clear strategic direction for a new West Pierjust as importantly, engaged the Trust members, the wider Brighton and Hove community and the general public in the future of the West PierIt is important now to build upon this by moving the conversation around the Future Strategy carefully forward and to encourage further engagement wherever possible. The West Pier Trust will now:Explore in more depth some of the suggestions made during the consultation process to give an initial assessment of what would be feasible. This will include consultation with Brighton and Hove City Council and review of likely funding sources.Subject to this prepare a development brief for a new West Pier.Keep focussed on the wider Strategy. Whilst the consultation on the Future Strategy has generated much interest around a new West Pier the Trust will not lose focus on the strategic priorities of the successful operation of the i360 and the development of the Heritage Centre.Consultation16 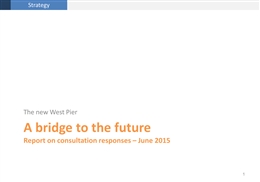