Hypothesis and Goals
During digestion, asparagus produces sulfur compounds, which are beneficial in the reduction of the growth of cancer cells (Mitchell, 2001). Further investigation led me to discover that asparagus produced high levels of sulfur that can be found in the enzyme, glutathione peroxidase. From this, I started studying the effect of asparagus on yeast activity.
I wanted to see a decrease in yeast activity compared to a negative and positive control. A decrease in growth meant that the asparagus, containing high amounts of sulfur, inhibited the growth of the yeast cells.

Yeast Cells as a Model Organism
Scientific studies have shown that Saccharomyces cerevisiae could be used as an alternative to cancer cells when doing research.
(Hartwell, 2001; Mortimer, 1973)

Conclusions from Viable Colonies
Although viable colonies have limited quantification, the pictures show the apparent difference of structural colonies between the Positive, Experimental, and Negative.

Acknowledgements
Thank you to Sigma Xi for this opportunity. Thank you to Raudhah Rahman, Experium Science Academy, my parents, and those who have supported me throughout. 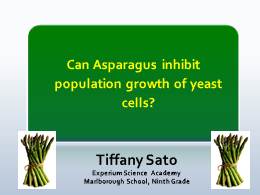