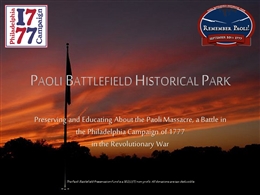 The Battle of Paoli, also called the “Paoli Massacre,” was a vicious battle that occurred during the American Revolution. It was fought at midnight on September 20-21, 1777. Although the battlefield is located in the present-day Borough of Malvern, it received the name due to its proximity to the Paoli Tavern, a well-known landmark in 1777. This 44-acre historic site was preserved in 1999 through the cooperative efforts of schoolchildren, local citizens, community leaders, historical organizations, county, state, and national government leaders and agencies. The Battlefield was dedicated on September 21, 2002, the 225th anniversary of the battle, and has been preserved in its unchanged original form: woodland and farm fields. The Paoli Battlefield Preservation Fund is dedicated to protecting, preserving and promoting the historical significance of the Paoli Battlefield through the funding and development of educational programs and conservation activities including historical tours, reenactments, research, publications, lectures/workshops and restoration of the property to its indigenous state.