! The Economic Benefits were Not Clear ! Until Now, Return on Investment was Uncertain ! The return was uncertain and the investment was uncertain ! Viable improvements and their returns were unknown ! Tenants pay utilities, so capturing savings was difficult ! Retrofit payback may exceed your holding horizon ! ! Even though you know the benefits and want to retrofit your energy systems, you may not have the cash available or the reserves to borrow at advantageous rates. ! You donÕt want to divert capital from your core business ! Retrofit needs exceed supply of needed capital Reasons You HavenÕt Yet Upgraded to Efficient Energy Systems

! Savings are not only locked in by contract, but insured. ! First Sustainable invests in a study which not only proves the savings, we then buy an insurance policy to guarantee them. ! First Sustainable arranges for non-recourse, off balance sheet financing , with no additional liens on your building. ! You need not use any of your own borrowing power or assets. First Sustainable arranges for third party investment. ! Since there is no investment at risk, an upgrade is beneficial to owner and tenants, no matter who pays the bills. ! With entire project financed off balance sheet, payback guaranteed, our agreement fully assignable, and equity and asset values increased immediately, ownership horizon is no longer an issue. Our Solutions to those Challenges

! Energy savings, often more than 30% of annual utility costs , yield an immediate increase in Net Operating Income. ! Increase in NOI = an increase in the value of the property. ! Increased Equity ! Off balance sheet, non-recourse debt, with no need for a lien on underlying property results in an increase in ownerÕs equity. ! For owners planning to refinance (or sell) the property in 18-24 months, the resulting increase in equity and value provides immediate leverage. After 6-7 years, even more so. ! Financing with no recourse, no capital expenditure, and no additional security interest in the underlying property, increases operating income, equity, and asset values, with virtually no risk. ! Makes financing of energy retrofits possible to virtually all owners without regard to capitalization or borrowing power . Summary of Benefits to CRE Owners

! Virtually any commercial property with utility bills of $1.5 million or more is eligible for a free energy audit ! Hotels - Hotels with as few as 200 Rooms are often viable , particularly in areas where the cost of energy and water is particularly high such as in NYC & Europe. ! Office or Residential Buildings (including condos and coops) of 200+ units or more than 200,000 sq. ft. ! Hospitals, Assisted Living, and Health Care Facilities of at least 400 beds or 200,000 sq. ft. or more. Does Your Property Qualify?

! First meeting - we pre-qualify you for our program, and arrange for a complimentary audit of your property to identify viable savings. ! Within 30 Days - the audit is completed, and if favorable, the energy company, in collaboration with your engineers if you wish, undertakes to ÒproveÓ the savings, at our expense. ! Another 30-60 Days - With energy savings validated, we secure an insurance policy to guarantee those savings. ! After securing the insurance, our attorneys work with yours to work out the details of the agreements. ! Within 90 days of the issuance of the insurance policy, we consummate the Agreement. The energy company, in partnership with your preferred contractor, if any, begins to install the retrofit. ! The retrofit is operational within 2-6 months. The Process

Appendix 17 Our Program and The First Sustainable Team

! The sophisticated financial structure of the SESA-ABS program is established in order to provide a scalable system in which the creation of new bank loan capacity is made possible by creating long term bonds. ! First Sustainable has secured bank warehouse debt to finance the SESA Program. A critical mass of SESA receivables can then be aggregated to support refinancing with a long term bond. A bond financing can be implemented to refinance the bank warehouse facility, thus freeing up new bank loan capacity, to be used to finance new SESA related transactions, and thus create new SESA receivables. This process can be repeated periodically through the life of the SESA Program. ! What all that means for the CRE owner is that First Sustainable will continue to be able to finance future projects for you and others. Our Program: Survivable Energy Services A greement (SESA) A sset Backed Security (ABS)

First Sustainable, LLC & Our Partners One of the NationÕs Top 5 Banks

! First Sustainable, LLC - Our primary focus is to develop a group of specialty finance businesses under the First Sustainable umbrella, organized to exploit the aggregation of compelling, nascent, renewable/efficiency project asset classes, characterized by proven technology, yielding predictable, long-term cash flows and very favorable risk adjusted returns. ! Pennsylvania Power & Light - PPL is a fortune 200 company and a leader in conservation that provides energy audits for our clients ! DLA Piper - the largest and one of the most respected law firms in the world handles our legal work and has provided analysis of our SESA and confirmed its efficacy. ! Hannover Re - third largest insurance company in the world guarantees savings identified by the energy auditors ! Zero CapEx Energy - our sales and marketing partner ! Top 5 Bank - one of the top 5 banks in the US provides financing for all of our projects First Sustainable, LLC & Our Partners

Scott Sidell, Ph.D., Chief Executive Officer As founder and chief executive of First Sustainable, Dr. Sidell focuses largely on conceiving and implementing the strategy to impose the proven ABS specialty finance approach within the sustainable project space.!! He is working with numerous financial institutions with which he has developed relationships over the years, to secure the credit and underwriting commitments necessary to successfully pursue this framework.!! Prior to founding First Sustainable, Dr. Sidell spent 20 years as a quantitative institutional debt arbitrage trader and the last seven as Chief Executive of a specialty finance company that he started at Millennium Partners, one of the worldÕs only investment grade rated hedge funds .!! Dr. Sidell was instrumental in arranging the sale of the company at the end of 2006. Dr. Sidell received his Ph.D. and M.A. from Cornell University, and BA from Boston College.!! He attended Harvard University as an Exchange Scholar in the Department of Economics.!!He is the author of several books and academic articles related to global finance. Steven Turner, Chief Legal Officer At First Sustainable, Mr. Turner provides legal and transaction advice and support in connection with company renewable energy asset securitizations and related asset acquisition and project financings, as well as legal services in connection with all corporate financings, contracts and internal organizational matters.!! Mr. Turner has over 20 years of experience as a!capital markets transactions!lawyer, with extensive asset securitization transaction expertise over a broad array of underlying asset classes, including mortgage loans, consumer/auto loans, credit card and trade receivables, government leases and government-supported export loans.!Mr. Turner previously worked as senior internal counsel and as legal consultant to major U.S. and European financial institutions, including Deutsche Bank, UBS and! Lehman Brothers.! Mr. Turner received his J.D. in 1982 from! Harvard Law School! and his B.S. from! City College of New York. Mark Douglas, Chief Financial Engineer Mr. Douglass has over 20 years of experience in virtually all aspects of ABS securitization.!!Having run Bear SternÕs ABS trading desk through 1995, he was also Gen Re Securities Global Head of Asset Backed Securities through 2002.!! As a senior ratings analyst, Mr. Douglass spent four years at both Fitch and Moodys, and in 2004, was instrumental in the start-up of the Monoline Insurer, Security Guaranty Holdings.!!In 2006, he managed a $400MM portfolio of structured product related debt on behalf of New Star Financial, a specialty finance company.!! Mr. Douglass directs First SustainableÕs efforts to identify, structure and securitize new green asset classes, by liaising with his multitude of strategic and propriety contacts in the banking and rating sectors.! Mr. Douglass received his MBA in Finance from the University of Chicago and B.S. in engineering from Washington University in St. Louis. He served as a captain for the U.S. Air Force in the Engineering Group of the U.S. Space Command from 1983-1987. Our Executive Team 21 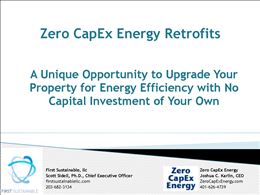