Overview
Have you ever been in an area where internet access has either a limited connection or no connection at all? The Wi-Fi Extending Robot may be something you will be interested in.
The Wi-Fi Extending Robot is a tank-like drone weighing 150 pounds. This robot is remote control type, capable of controlling itself, as well as being manipulated by outside sources.

Overview (cont’d)
This robot was built by a group of students from Northeastern University in Boston. The robot was called a hero for having its own mobile Wi-Fi hotspot, as well as being able to extend its network by dropping wireless repeaters.
As of right now the robot is still being worked on. With more work the robot will eventually be able to walk up stairs. The robot is patented by Northeastern University.

Description
Applications
As of right now the lifespan of the robot is 12 hours of battery life
This robot’s main purpose it to boost Wi-Fi signal in areas where signal easily drops or is dead.
The robot uses its two routers as repeaters in order to constantly keep Wi-Fi signal to a high level

Description
Impacts
The use of this this robot will impact the world greatly. Less money will be spent on building large amounts of routers if these robots can maintain high signals. Society can benefit greatly from the promise this robot can provide. Extended and stronger can also benefit education by students having Wi-Fi signal outside to use their computers to learn and look up material.

Evolution of the platform
As of right now, the Wi-Fi Extending Robot is still changing. Changes of the robot are in the works now. The version made by these students is the only one of its kind. Not too much is known about problems encountered in the robot’s creation. According to Tech Hive, the software for the robot was custom built, meaning long hours of work in programming.

Forecasts
The inventors of this robot wish to increase the run time of the robot. In order to extended Wi-Fi signal for a long period of time, more battery power is needed. According to Bostlnno, there was no mechanical engineer on the design team, something that surprised a lot of people. In my opinion, I believe that this robot will revolutionize wireless connections as well as future technological achievements.

Annotated Bibliography
Varias, Lambert. Wi-Fi Extending Robot: Not the Hero We Deserve, But the One We Need. 2012. Website. technabobWeb. 9 Oct 2012. .
Talks about how a group of students from Northeastern University built built a tech lovers best friend. A robot that could extend Wi-Fi strength. The robot was able to do so by dropping wireless repeaters. A webcam, GPS module, and two routers were converted into repeaters for the military robot. The robot can be controlled on its own network.
Admin, . WiFi-Extending Robot is built like a tank — we speak to a people behind a plan. 2012. Website. Best Tech GuidanceWeb. 9 Oct 2012. http://www.besttechguidance.info/wifi-extending-robot-is-built-like-a-tank-we-talk-to-the-people-behind-the-project-video/>.
The drudge measures 40 inches prolonged and 28 inches wide, weighing in during 150 pounds. The robot can run the repeaters for 12 hours. The webcam can do night vision and video can be noticed by a exclusive HTML5 web portal, that is used to control the device. The robot costs about $1500 to $2000 to build.
Su, Sonia. Northeastern Students Build ‘Utterly Badass’ WiFi-Extending, Military Robot. 2012. Website. Bostlnno, Boston. Web. 9 Oct 2012. .
The intricate design consists of the Wi-Fi deployment system. With the Wi-Fi deployment system, any device with a Wi-Fi card can connect to the robot’s repeated signal. The robot is also capable of carrying a 200 pound person. The team believes that with a more powerful motor the robot could climb stairs. No mechanical engineers were on the team building the Wi-Fi Extending Robot. 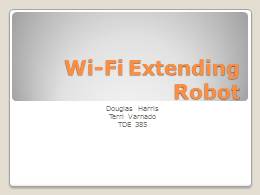