Welcome Shareholders
Welcome to all of you and thank you for taking the time for this call.
During this call, we will give you an update on the company’s situation and explain our plan of actions for the future
Finally we will answer your questions at the end of the session
Here is the detailed agenda for the call: -> See Agenda
Confidential – COREwafer Industries Inc 2013

Brief History
Action Products International was incorporated in 1977
In 2008, the company began restructuring and in 2009 exited the toy business.
In 2010, the company became a holding company focusing on acquisition and managing business with strong growth potential across various industries.
In 2011 the company completed its first acquisition. Northeast Expedite Logistics, LLC, was completed December 29, 2011.
The Company completed the acquisition of Core Wafer Systems, Inc. in October 2012 – Technology and Software sectors.
The company changed its name to COREwafer Industries inc in December 2012.

Current Situation
Former Sales/Marketing Team resigned in 2012.
Development Team outsourced with limited activity due to lack of cash flow.
Sales revenue has been lower than expected.
High level of debt.
Pending law suits/judgments have been tackled one by one and working to resolve each one.
Despite press release in 2012, there was no cash received by the company , it was an equity reserve financing contracts based on volume and share price.

What did we do in 1 Month?
New Board in place including external experienced entrepreneurs and existing investor.
Change of address: Move HQ to Florida.
Selected firm to deal with auditing and up listing the company.
Selected firm for shareholders’ relations and communication.
Selected an experience d web designer.
Dealt with some of the financing contracts signed in the past.
Open discussion with major investors (companies and individuals).

Products Development
As we speak we have 6 products ready for market even though upgrade(s) and new features are mandatory to answer the market and customers’ base demands
PDQ WLR, ASUR PDR, ASUR SDR, ASUR RDA, PDQ PARA and PDQ FAB.
We are focusing on 3 products upgrade : SDR, RDA and WLR.
We have selected an outsource development team. Timing for completion is 3 to 6 months once the funding has been procured.

Marketing & Sales Strategy
We are currently developing our sales/marketing team. To minimize the cost and to speed up the process, we will build partnerships with a few firms already active into our sector to cover US and Asia then Europe.
For marketing, we will use firms’ expert in this domain to market our company and products more efficiently.
Confidential – COREwafer Industries Inc 2013


Confidential – COREwafer Industries Inc 2013
We are in discussion with a few large investors such as private equity, sharing revenue company and private investors in the US and abroad.
The investment required by the company is for:
The operational, R&D and Sales/Marketing
Legal
Debt
Acquisition
Approximate funding required $15M 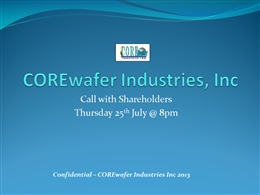