In 1947, the first animals were launched into space. Fruit flies were used see if living things could survive in space, and were chosen because they are more similar to humans than you might imagine!

The flies travelled with a supply
of corn to eat on the flight.

Albert was the first monkey in space. He was a Rhesus monkey, a type of monkey that originally comes from Asia.

On 4th October 1957, Russia launched Sputnik 1 into space and the space age had properly begun!
Sputnik was the first satellite in orbit around the earth.

In November 1957, the Russian space dog Laika became the first animal to orbit the earth.

Laika travelled in a spacecraft known as Sputnik 2. Laika means "Barker" in Russian, and her mission helped
scientists understand
whether people could
survive in space.

American and Russian scientists were in a race to get the first man into space. On 12th April 1961, Russian Astronaut Yuri Gagarin became the first man in space. Gagarin's spacecraft, Vostok 1, completed one orbit of the earth, and landed about two hours after launch.

Gagarin had to bail out and
land using his parachute,
because the Vostok 1 was
designed to crash land

Alan Shepard was the first American into space. He was
supposed to go into space before the Russian Yuru
Garagin but the mission was put off because of weather
conditions. On May 5th, he lifted off into space.

Although the Russians won the
race to space, the Americans
made a bigger as the blast off,
travel and return to earth were
on television for millions of
people to see.

The first woman in space was Russian
cosmonaut Valentina Tereshkova.

After her 1963 mission, Valentina became an
important member of the
Russian Government, and
has been awarded many
honours and prizes for her
achievements. A crater on
the far side of the Moon is
named after her!

USA-1969-Man lands on the Moon!
On 20th July 1969, Neil Armstrong, and Buzz Aldrin
took became the first men on the moon. The first words
said on the moon were "the Eagle has landed".

Their spaceship, Apollo 11 worked perfectly, flying them to
the moon, and bringing them all the way
back safely to earth. Buzz was a
childhood nickname – his real name
was Edwin!

A famous quote from Neil Armstrong
when he landed on the moon
was ‘That’s one small step for man...
One giant leap for man-kind.’ 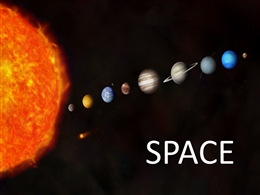