Project Proposal/Statement
My projects goal was to capture and show the abandonment of a space in demolition. I wanted to focus on the lonely and isolated feeling that demotion creates and I am going to show it mainly through panoramas, but with some landscape and portraits where needed. I am mainly using panorama because this technique can help my project tell more of a story by capturing more of the open scene. This project is something that has emotion but also portrays this idea of a cities treasures being forgotten whilst being pulled down and replaced. I will enhance this emotion and feeling by keeping the natural lighting of the photographs but aim to shoot during the last parts of sunset, so I still capture some detail in the sky, but enough dusk to help bring out the demolitions sadness.
Evaluation
My initial idea for this project was focused on the isolation of rural treasures outside of Wellington City. Around my second shoot my idea of “isolation” developed into “demolition which made me think about a slight location change. Comparing my contact sheets I am happy I changed as the old buildings of Christchurch had the emotion I was wanting to capture at the beginning. The time of day that I shot in was a great time for the mood of the project as it had enough light for sky to have detail and texture but not to much that they were overly bright, which could have adjusted the way we felt the emotion that was being portrayed. I could have used a few more panoramas to show more wide angles, but for my presentation the landscapes and portraits were used as a ‘zoom in’ type tool to focus just on a few details instead of a wide view. Overall, I am pleased with the outcome of my project because even though I had a change of location early on, it still portrays a lonely and abandoned demolition sight that’s isolated within a empty City. 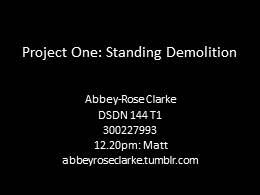