Backgrounds
The Archers
Is the longest running radio soap in the world.
Is currently the most listened to radio programme, other than the news, with 5 millions followers.
Is set in a fictional county called ‘Borsetshire’.
Is set on day of broadcast, allowing for topical episodes.
Began broadcasting in 1951 on BBC Radio 4.

War of The Worlds
Was originally a book by HG Wells, written in 1898.
Adapted by Orson Welles as a radio drama in 1938.
One of the oldest novels depicting conflict between aliens and humans.
Within a month of broadcast, 12,500 articles were written about the panic surrounding the radio drama.

Radio Codes - Speech
The Archers
Characters are directly addressed more frequently than other formats of soap.
Very little effort towards showmanship.
More naturalistic
War of The Worlds
Much of the speech is over exaggerated to compensate for lack of facial expressions.
When the ‘mysterious stranger’ is met, he is defined by his voice.
Uses specialist language to help identify characters.
Scientific language
Presenter/New reader

Radio Codes – Sound Effects
The Archers
Most of the effects are recorded at the same time as the voice recording.
Sets are made to record realistic sound effects.
Each resident has different a doorbell.
Dedicated effects manager who creates sounds whilst working.

War of The Worlds
Relies heavily on effects to show when aliens are in the scene.
Many sound effects sound genuine, even after 70 years.
Explosions often distorted to create the effect of transition through a two-way radio.
Screams of women and children create a realistic sense of terror.

Radio Codes – Sound Effects - Examples
Here is an example of how The Archers’ crew have added sound effects to recording.

Radio Codes – Ambient Sounds
The Archers
Different rooms used in different scenes.
During winter months, wind will muffle through windows to create a life-like effect.
Footsteps can be heard from different parts of the ‘house’.
War of The Worlds
Background talking used to create a large crowd during the new segment.
Use of silence to enforce lack of life.
Noises associated with a dessert used in the post-war time period.
Whistling wind
Bird chirping

Radio Codes - Music
The Archers
The only recognisable piece of music is the opening and closing of the show.
War of The Worlds
Distinct lack of music for in the final act.
Music creeps back in as the illusion of a real broadcast has faded.
Music isn’t an integral part.
Used more throughout intermissions.

Radio Conventions
The archers
Over the years it has been slowly challenging what is aloud in a radio drama
It varies from the norm by using almost all Foley sound effects
It sticks closely to the conventions of soaps.
Storylines often follow affairs, relationships and even some touchy subjects (terminal illness)
The war of the worlds
Many of the conventions we follow today were set in place by this broadcast
This is often defined as the ‘bible’ on sci-fi dramas
As we see conventions today it aims for the fear of the future category
It could even be seen as colonisation in reverse.

Structure
The archers
Can sometimes consist of only one or two acts per episode
Some storylines can last for months and drop in and out of episodes
Usually follows a; problem, motivation, helper, resolve structure.
War of the worlds
Has a three significant act structure that has become common place in sci-fi
Roughly follows a monomyth or heroes journey structure in the final act
Focuses more on the hero coming to terms with his ‘quest’ this Is known as the belly of the whale.
The heroes journey turns into an exercise in futility by the end. 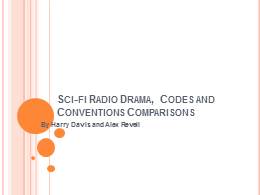