What is the program?Click to Find Out!

Charles E. SchmidtCollege of MedicineThe medical college at Florida Atlantic University established through cooperation and communication with the University of Miami (UM) Miller School of Medicine. Charles E. Schmidt College of Medicine started out as a two year campus in 2004 as an extension of the University of Miami Medical College, and became a 4 year college in 2007It was still considered part of UM until 2010 when the Florida Legislature signed a law that made the FAU site an independent institution capable of delivering medical education and conferring degrees to medical students NEXTClick

Who does it Serve?FAU is a state funded university it serves the people of the state and specifically Palm Beach and Broward County. Within the context of the biomedical program directed by Dr. Linger, the geriatric population is of central focus. In addition, there is a research component via partnership with Scripps Research Institute through which students are encouraged to connect to their local community through volunteerism and community service. NEXT

Areas of the OrganizationWithin the College of Medicine, there are many smaller institutions and organizations including:ClickNext

The mission of the Charles E. Schmidt College of Medicine is to “create and sustain an environment of professionalism, scholarship, intellectual enquiry, and inclusiveness that enables our faculty and students to achieve their respective goals as health care professionals and biomedical scholars.”When Dr. Linger was asked if he had and specific goals, he stated that his mission is to, “To support the educational program and try to make it as easy as possible for faculty and course directors to “deliver curriculum, and provide an outstanding environment in which they can deliver comprehensive information to students.” NEXT

Balancing RolesTeacherAdministratorLeaderMentor “I am spending some time teaching, in a variety of roles including small group instruction, mentoring students and faculty advising and development. Half my time is teaching, and the other half is administering.” –Dr. Barry LingerTo skipClick each link/icon for details

BudgetingThe money for the College of Medicine comes from state of Florida. Dr. Linger stated that the leadership of various funding units work together on budget issues. Critical Issues

Dr. Linger cited several critical issues related to resources including developing curriculum with current funding, increased training sites, residency requirements, funding of medical school, and reliance on volunteer faculty. He states that these are all “big issues.” Current budget limits do not provide for additional space necessary to accommodate larger class size and space for faculty. There is a budget necessity that allows for more paid staff and less reliance on volunteer instructors. Next

Community Building “I think our community building has to do with the work that we do with our volunteer faculty who goes out in the community. In addition, students in the residency program are required to do 100 hours of community service.” -Dr. LingerClickNEXT

How are students recruited/identified FAU Medical Students: The Best of the BestClick

Dr. Linger stated that there have been 4000 applications for the 64 slots this year. There are set requirements as far as grade point average (GPA) and Medical College Admission Tests (MCAT) scores. Once they meet entry criteria, appraisers look through their application. Three people look at each application and information file. Once selected, potential students are invited for an interview. Out of the four thousand applicants only ten percent are chosen for the interview process. Dr. Linger feels the best way for the program to market is through word of mouth and social networking. He does go to college and professional school fairs to encourage students to attend the COM at Florida Atlantic University; however, he feels that if the college treats students well and provides an exemplary education then students will continue to want to attend classes at the institution. NEXT

Program Evaluation Dr. Linger feels evaluation should take many forms, and he uses a variety of methods to assess students, staff and the program including: ClickNEXT

Skills Administrators Need Dr. Linger feels important skills and traits an administrator can have is to be “even keeled,” supportive, have a vision. He also thinks they should avoid micromanaging.” He firmly believes in administrators having good people skills. He thinks that if an administrator shows the people they work with that they are interested in them as people; they will work harder for you. Next

According to Dr. Linger, it is important to remember you never know everything. He feels administrators should look at the way others do things and take on the best characteristics of many leaders. He talked about how one of his teachers was disciplined, and detail oriented while another was laid back and casual. They had different styles, but both were successful. He tries to integrate both of those attitudes into his leadership role. He suggests looking at the good things people do and incorporating that into your style. He also recommended leadership training seminars and taking advantage of educational opportunities.Next

The downside to technology is that it can lead people to become more isolated, and decrease the socialization necessary for organizational effectiveness. He prefers face-to-face communication over email; and likes to go see people, look them in the eye, and talk to them. He believes that the connection of physically talking to people is important. BackCons

Pros Dr. Linger believes that technology helps in the area of communication by giving administration, students and faculty quick access to information. The benefits of technology include the ability of students and faculty to gain access to a central database that gives them information on lessons and schedules over several years. It has also been beneficial in the area of research within the COM program. BackNext

After interviewing Dr. Linger, I became more cognizant of the complexities of his current leadership role. Like most administrators, he wears many different hats, and must juggle a number of duties to maintain optimal organizational function. I became aware of a couple of consistencies throughout our interview, including his focus on humanistic characteristics in his leadership style, and his idea of delegating responsibility to people he trusts. After interviewing him, I realized that it is not only important to be a great leader; but equally critical to be surrounded by a supportive team of knowledgeable staff and colleagues. On the whole, I found the complexity of the leadership role he maintains within is even more multifaceted than I had imagined. 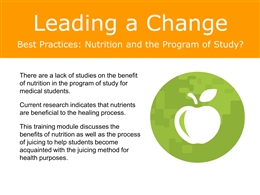 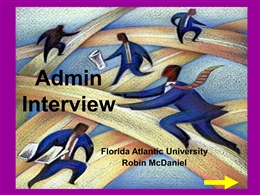