‘Closer’ by Kings Of LeonEmelle Wiltshire

Kings Of LeonKings of Leon is a Grammy winning American rock band that formed in Nashville, Tennessee in 1999. The band is composed of brothers Anthony Caleb Followill (b. January 14, 1982, lead vocals, rhythm guitar), Ivan Nathan Followill (b. June 26, 1979, drums, percussion, backing vocals) and Michael Jared Followill (b. November 20, 1986, bass guitar, backing vocals), with their cousin Cameron Matthew Followill (b. September 10, 1984, lead guitar, backing vocals). The band's early music was an upbeat blend of Southern rock and blues influences, but it has gradually expanded throughout the years to include a variety of genres and a more alternative, arena rock sound.

Only By The NightOnly by the Night is the fourth studio album by American rock band Kings of Leon, released worldwide in September 2008. Writing for the band's fourth album commenced just days after the release of their third, Because of the Times. The album was recorded by producers Angelo Petraglia and Jacquire King through February 2008 in Nashville's Blackbird Studios.Only by the Night experienced commercial success, peaking inside the top 10 of over 10 different countries. The album was certified the best-selling album in Australia, certified nine times platinum. It also went on to be the highest selling album of 2008 in Australia, the third best selling album of 2008 in the UK, winning two Brit Awards, and the 18th best-selling album of the2000s in the UK.The reason that I targeted this album was for the simple reason of it appealing to me the most and I found this album involved many tracks that I could visually see a music video being created in my head.

CloserThe song ‘Closer’ happened to be one of the less successful tracks within the album ‘Only By The Night’ which doesn’t actually have a music video – one of the reasons as to why this song appealed to me. The lyrics within the song are said to be revolving around the surreal world of vampires; the song notes about danger and trying to run away from something. However, I have chosen to involve a purely narrative based video with no correlation to the lyrics. Stranded in this spooky townStoplight is swaying and the phone lines are downThis floor is crackling cold, she took my heart, I think she took my soulWith the moon I run far from the carnage of the fiery sunDriven by the strangle of vein showing no mercy I do it again,Open up your eye, you keep on crying baby, Ill bleed you drySkies they blink at me, I see a storm bubbling up from the seaAnd it's coming closerAnd it's coming closerYou shimmy shook my boat leaving me stranded all in love on my ownDo you think of me? Where am I now? Baby where do I sleep?Feel so good but I'm old, 2000 years of chasing taking its tollAnd its coming closerAnd its coming closerAnd its coming closerAnd its coming closer

Why?The song ‘Closer’ appears to have a very atmospheric feel to the song and I found that it created a particular mood when I listened to it – of which I believe I could capture within a music video that fits into the genre of the music; which is not only slightly chilling, but also develop an enigma code that I believe the lyrics entail.

Concept Enigma codes consistent throughout with regards to the video following a person from the point of view from the thing that is coming ‘closer’ – not revealed until the end. Use of over the shoulder shots, movement shots. Time lapse will be used to build a climactic feel to the video of which will occur at the end. The use of time lapse will start in daylight and end at night time to emphasize the tension and ‘dark fantasy’ aspect that relates to the lyrics. Extreme close ups within the drama studios with lighting will be used to vary the different shots used within the video as well as to symbolise the sun with regards to it looking like a sunset and utilising it for reaction shots without a complete reveal of the person’s face who is being followed.

LocationNorsey WoodsTime lapse shot occuring on a motorway within Basildon (linear)Time lapse shots of Gloucester Park (clouds) Utility of the drama studios for the purpose of extreme lighting with regards to extreme close ups and silhouette shots.

CharactersOne character being followed and another being the one following.A girl being the character who is being followed as this relates to stereotypes of females being ‘weaker’ and almost creating a ‘damsel in distress’ character. The person following the girl will never be shown and this will be the silhouette aspect that will occur throughout the video creating an enigma code.

Narrative or Performance?I decided to sway with a narrative for the music video for the reason that it personally appeals to me as well as my target audience (through research) videos that have an unfolding story to them. I believe a narrative video allows bigger boundaries with regards to conventions as well as allowing something to look more professional. With regards to a performance video, it has been proven difficult that synchronicity with the music and performing artist in previous years’ school work has been slightly out of touch therefore, I believe lessening the verisimilitude of the entire video.

Target AudienceIt has been an initial and slow development to recognise my target audience which has been depicted through the use of a survey that I handed out to several people my (17-18) and an older age of 30+ allowing a differentiated view. The survey noted that my age group specifically were more interested in the genre that the Kings Of Leon feature within as well as the fact that I am not going with conventions and involving performance within the video (which the older audience that were involved with my survey preferred). The focus groups are also a matter of live and formal feedback that I can use; which has been specially moulded to what we believe are suitable to our genres and fit within our target audience. 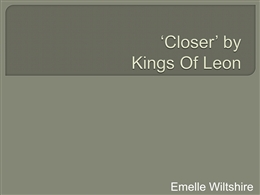