The term Jalabiya is the name adopted from the Egyptian Arabic region.pdf

The term Jalabiya is the name adopted from the Egyptian Arabic region.pdf... Read more

The term Jalabiya is the name adopted from the Egyptian Arabic region. It is a traditional garment in Egypt those are the native to river Nile. The other name of the garment is jelebeeya. Shalatin tribes are viewed to wear these types of garments. It is a type of garment with wider cuts among other types of Muslim garments available in the market. The difference between this and Arabian thawb is the fact that the particular garment has no collar with wider cut and even wider sleeves. If the framers are wear ing these garments, the sleeves would be much wide. Many Egyptians living along the coast of Red Sea and the Sinai Peninsula along with the tribes of Badawi wishes to wear thawb or dish dash of Arabian style over the Jalabiya.

Facts about Islamic c lothing One of the most influential religions in the nation is none other than Islam. Thus, their clothes are also quite influenced by their religion. Islam also has other factors that help other people to identify their religion. With pattern of Islamic clothing easily realize their religion. The attire of a Muslim person can change according to the geographical boundary, social status and the group identity. Their values and believes are reflected through this Islamic clothing. They still foll ow the pardah system. Their clothing It is believed that, Islam believes in modest and simplest way of living. But, the recent trend of Islamic attire and dress sens e has made other people with different religion really jealous. Even if the clothes are closed from top to bottom, these are suitable for all weather condition. The materials used in making these types of clothes are cotton and silk. In the Middle East cou ntries as well as Asia, these clothes are having a great demand. Even the non Muslim people are purchasing the Muslim garments.

A prestigious and descent wear Kaftan Jalabiya is the popular type of clothing available in Muslim markets is used by many Muslim women. It looks like a gown with slight different look. Women look prettier after wearing this particular Muslim garment. Clothing is an important thi ng which is recognized at first sight whenever a person is viewed by the other. If the attire is different, we can easily make out that, the particular person has a different religion and customs rather than us. Women would always wish to look beautiful wi th the dress. But, Muslim women need to wear a different type of dress than the people having a different religion. They need to dress up decently and in an attractive way. Even if they are under a cloth from head to feet, they look equally beautiful and p resentable. You can find wide range of clothing under the Islamic variation. You need to choose the perfect one according to your need. Today, people can also get variety of such garments through popular online stores. 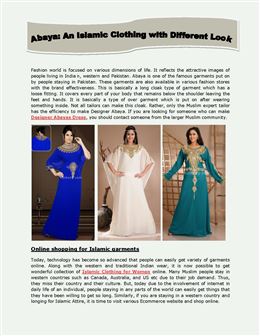 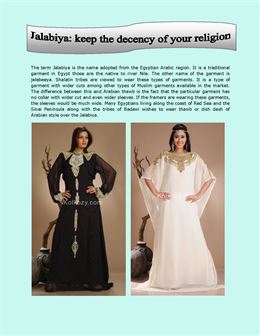