Definition of VirusA virus is a small piece of software that piggybacks on real programs in order to get executedOnce it’s running, it spreads by inserting copies of itself into other executable code or documents

Typical things that some current Personal Computer (PC) viruses doErase filesScramble data on a hard diskCause erratic screen behaviorHalt the PCMany viruses do nothing obvious at all except spread!Display a message

Boot Sector Viruses Traditional Virusinfect the boot sector on floppy disks and hard disks By putting its code in the boot sector, a virus can guarantee it gets executed load itself into memory immediately, and it is able to run whenever the computer is on

E-mail Viruses Moves around in e-mail messagesReplicates itself by automatically mailing itself to dozens of people in the victim’s e-mail address bookExample: Melissa virus, ILOVEYOU virus

PreventionUpdates Windows has a feature called Critical UpdatesAn entire branch of Microsoft dedicated to staying one step ahead of the hackersWhen a possible security loophole is fixed, you need to download the patch right away Anti-VirusesMore secure operating systems e.g. UNIX

WormsWorm - is a self-replicating program, similar to a computer virus. A virus attaches itself to, and becomes part of, another executable program; however, a worm is self-contained and does not need to be part of another program to propagate itself.

Morris WormThe first worm to attract wide attention, the Morris worm, was written by Robert Tappan Morris, who at the time was a graduate student at Cornell University.It was released on November 2, 1988.  The level of replication created system loads that not only brought it to the attention of system administrators, but also disrupted the target computers. It was guessed that the cost in "potential loss in productivity" caused by the worm and efforts to remove it ranged at each system from $200 to more than $53,000

Morris WormMorris himself was convicted under the US Computer Crime and Abuse Act and received three years probation, community service and a fine in excess of $10,000. Robert Tappan Morris is now a professor at MIT

Worms…Worms – is a small piece of software that uses computer networks and security holes to replicate itself. A copy of the worm scans the network for another machine that has a specific security hole. It copies itself to the new machine using the security hole, and then starts replicating from there, as well.They are often designed to exploit the file transmission capabilities found on many computers. 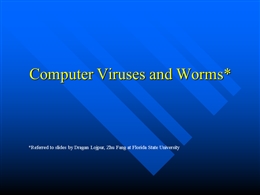