The Science of Colour
Isaac Newton

- In 1670-72, he investigated the refraction of light. Demonstrating that a prism could decompose white light into a spectrum of colours, and, that a lens and a second prism could recompose the multi coloured light back into white light.

Subtractive colour is mixing a limited set of dye, ink, paint, pigment or natural colourants to create a wider range of colours.
Subtractive colour systems start with light, presumably white light. Coloured inks, paints or filters between the viewer and the light source or reflective surface, subtract wavelengths from the light, giving it colour. If the light is other than white, our visual mechanisms are able to compensate well, but not perfectly, often giving a flawed impression of the "true" colour of the surface.
The RYB colour wheel is the standard set of subtractive primary colours used for mixing pigment. Red, yellow, and blue are the primary colors of the standard colour wheel. The secondary colours, violet, orange and green make up another triad, formed by mixing equal amounts of red and blue, red and yellow and blue and yellow.
In colour printing, we use the CMY/CMYK (K = Black) process. CMY stands for cyan, magenta and yellow. Cyan is the complement of red, magenta is the complement of green and yellow the complement of blue. Combinations of the three colours can produce a wide range of colours with good saturation.
In late 19th and early to mid-20th century commercial printing, use of the traditional RYB terminology persisted even though the more versatile CMY triad had been adopted.

The Qualities Of Colour
The three qualities of colour in painting, photography and artwork consist of hue, value and saturation.
Hue:
The traditional colour name of a specific wavelength of light is a hue/ Hue is a name for colour
Hue is a spectral colour, all of the colours in the spectrum are hues.
There are only limited hue names, red, orange, yellow, green, blue and violet. Magenta and cyan are also hues.

Value:
Value is concerned with the light and dark properties of color. All colors exhibit these properties.
Value changes are often obtained by adding black or white to a hue.
Here is an example of a value scale that has values ranging from the darkest dark, to the whitest white.


Saturation:
Saturation is concerned with the intensity or the brightness and dullness of colour.
A saturated color is high in intensity -- it is bright. Another term for saturation is Chroma
A colour that is dull is unsaturated or low in intensity.
A color without any brightness (no hue) is achromatic (black, white and/or gray).

Complementary Colours
Complementary colours are colours that are of opposite hue in colour models, such as red and green and red-purple and yellow-green.

In another theory, two colors are called complementary, when mixed in the proper proportion, they produce a neutral colour (grey, white, or black).

Contrast of Hue
Contrast of Hue occurs when a hue or colour is separated and outlined by black or white lines.
White lines weaken the 'strength' and appearance of the colour.
A black line strengthens the appearance of the colour, this would also make the colour around the black seem lighter.
Contrast of hue works with all colours together, eg. Yellow and Red, Violet against Yellow etc.
Johanness Itten created the idea of contrasting hue in 1961
The greater the distance between the hues on the colour wheel, the greater the contrast.


Red and green accentuate each other in

Colour Harmonies
Harmonious colours are colours that work well together.
They produce a color scheme that looks attractive.
The first thing to understanding colour harmony is to understand what a “key colour” is. This is the colour in a scene or piece of art which cannot change (as in an outdoor scene where there may be predominantly green grass). It is either the biggest amount of colour in the scene (a blue sky, for example) or what you are trying to concentrate your attention on in the picture (an animal in the forest). the key colour determines the rest of the colours in your colour harmony.
Colour harmony is achieved by arranging particular colours as formulas. Although there are many theories and formulas for harmony, the four recognised formulas are:
- Monochrome
- Analogous
- Complementary
- Natural

Monochromatic
The Monochrome colour scheme is derived from a single base colour, using just one hue. This single colour is extended by using its shades and tints. As a result, the energy is more subtle and peaceful due to a lack of colour contrast.
Monochromatic colors offer very little contrast and may be considered boring unless there is diversity within the design.
Composition of the painting or art work is achieved entirely through adjusting saturation and tones. Although limited, monochrome colours can be a powerful approach.

Analogous
The Analogous formula is characterized by combining three of the colours which are side-by-side on the 12-part colour wheel. An example of this would be to use green, yellow-green, and yellow.
In most cases, when using an Analogous colour scheme, one of the three colors usually predominates.
Analogous is one of the most harmonious colour schemes.

Warm Colours
Warm colours are all hues of red, yellow and orange.
They are referred to as warm colours because they are found in elements
that give off heat and make people feel warm, such as fire and the sun.

Cool Colours
Cool colours are all hues of blue, green and violet.

Triadic Colour Scheme
The triadic colour scheme uses three colours equally spaced around the colour wheel.
This scheme is popular among artists because it offers strong visual contrast while retaining balance, and color richness.
The triadic scheme is not as contrasting as the complementary scheme, but it does look more balanced and harmonious.

Tetradic
Tetradic colour is another name for double complementary colour.
The Tetradic colour scheme is the richest of all schemes because it uses four colours arranged into two complementary color pairs.
This scheme is hard to harmonize; if all four colours are used in equal amounts, the scheme may look unbalanced, so to balance, you should choose a colour to be dominant or subdue the colours.
You should also pay attention to the balance between warm and cool colours in design when using a tetradic colour scheme. 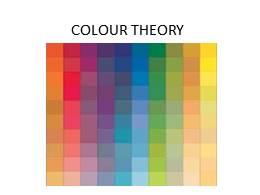