Darren Jones – Pastor – 678 4121
Mary O’Brien – Toddlers & Searchers – 01928 725135
www.mathesonevangelical.org.uk
Could you join us this Spring as we help Blythswood Care fill up Buckets of Love to bring relief overseas?


We can all help make an amazing difference by filling a blue bucket with items requested by those most in need: Oven gloves, duct tape, toothbrushes... all sorts of basic things we take for granted.

Not forgetting...
Regular All-age service 4:30pm 15 April
We’re making some developments to Searchers
Searchers is our weekly mid-week club for primary school-aged children – but about half our current group are Year 6 or older! It’s time for change...
(Cont. Page 2)
In January we started a 7-week course where 8 people looked into what Christianity is really all about.
It went so well we had to extend it by an extra 3 weeks and we’ll be picking up again after Easter!
(Cont. Page 3)
www.mathesonevangelical.org.uk

Matheson is part of Liverpool City Mission, which includes the Birkenhead Charles Thompson Mission
Coming up in Summer 2012

With Euro 2012, the Olympics, Paralympics, Wimbledon and more, this summer is set up for sport!

We’re planning something special, so watch this space!
Next Course starts after Easter
See Darren for details
Darren Jones joined us as our pastor in September
This is his first church as a pastor as before that he was a senior manager in companies like Barclaycard and Vodafone, where he led teams planning and budgeting for call centres.
Originally from North Wales, he moved to Wirral with Julia when they married in 1990. They have three sons (Matthew, Adam and Daniel). Darren plays guitar, mandolin and ukulele!
fb.me/mrdarrenjones twitter.com/mwnt
Changes coming to Searchers
Since February, we’ve been splitting one Searchers night per month in two – one for up to Year 5 and one for Year 6+. They’ve been a huge hit with the children, so we’re planning on keeping the split going every week from September onwards!
We asked the older children if they had any questions about Christianity for us to help with at Searchers. Here’s a sample of what they wrote:
“Why are there so many religions
if there’s only one God?”
“If God is in control,
why does he let bad things happen?”
This course is all about your own exploration of Christianity in a relaxed setting without committing yourself to “going to church”. It’s a chance to ask the really big questions about life, about God, about yourself.

Join in! Courses
are put on at times
to suit you.
Bread-tasting at All-age Service?
In our March all-age service, volunteers were asked to identify different kinds of bread by taste alone, and then to say where it came from... Baguettes, bagels, soda bread, naan – all sorts of bread.

All-age services are what it says on the tin – everyone is included, everyone is welcome.

And the bread?
Jesus said he was
the “bread of life”
- fully satisfying
and forever. 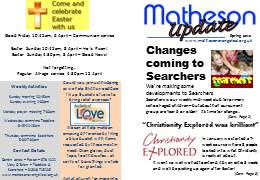